As a continuation of our honeymoon trip, Amy and I went to the Maldives. The Maldives are over 1000 islands in the Pacific just to the left of India. They take about four hours to get to by plane from Dubai. The capital of the Maldives is a place called Male, which is where you land. It is an amazing place to see as it’s an island totally covered in buildings, all around the same height.

When we arrived it was really hot and it stayed that way for the rest of the trip, hotter than Dubai I think. The weather was overcast for 2/3rd’s of the time but it stopped us from getting sunburned, which is exactly what happened when the sun was out.

After we arrived at the airport a little boat takes you to wherever you are staying. In our case the first port of call was a location called Baros. We had a beach villa which was totally private and it opened out onto the beautiful white sands and blue water of the Maldives – 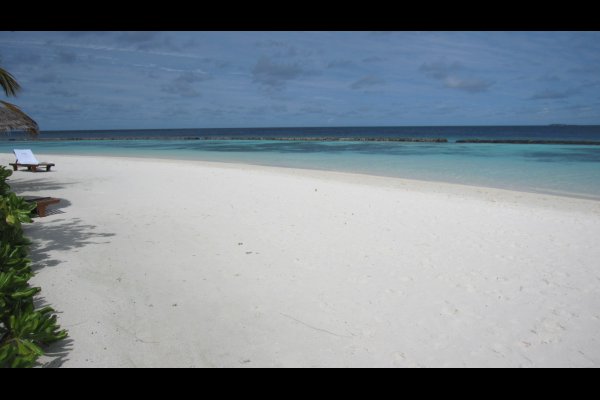 The service at Baros was amazing, when we told them it was Amy’s birthday they organised a surprise breakfast and a surprise cake at dinner. The service really was the best we’ve ever experience on holiday – 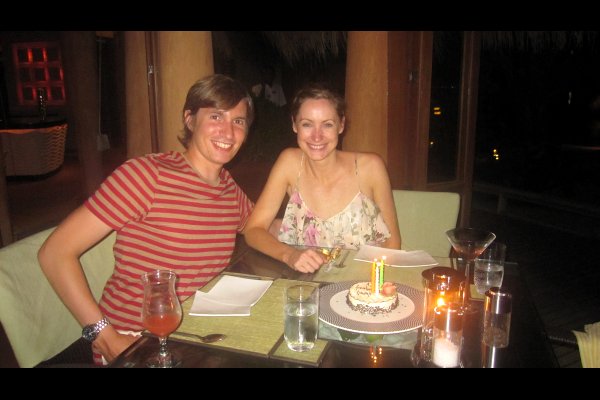 The majority of the time we spent on the island was done snorkeling, or walking around the circumference, which wasn’t very large or walking along the lovely tracks that were on the inside of the island. The night times at Baros were spent drinking cocktails and choosing which one of the three restaurants we should go to that night. One of the restaurants at Baros is out on the water and you can see fantastic sunsets whilst drinking cocktails – 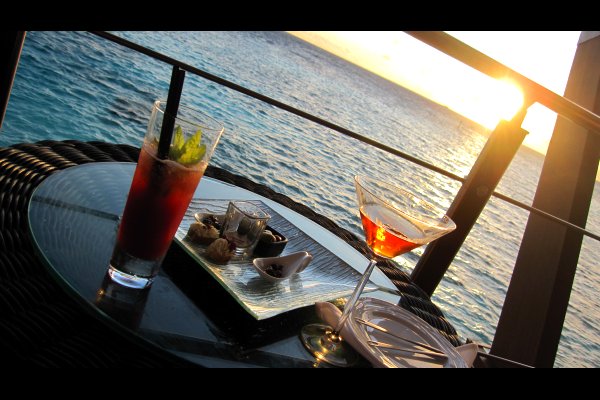 Amy and I also had a competition on the Island as there was a chess set, a pool table and a table tennis room. We had two games of each so was best out of six, I narrowly beat Amy by one game of pool to take the Baros Island Games Honeymoon Championships!

On one of our last nights at Baros it was Maldivian evening, where the food was all Maldives local based and we were given traditional Maldvian clothes to wear. Here’s us with a Maldivian lady (one of the very helpful staff at the resort) – 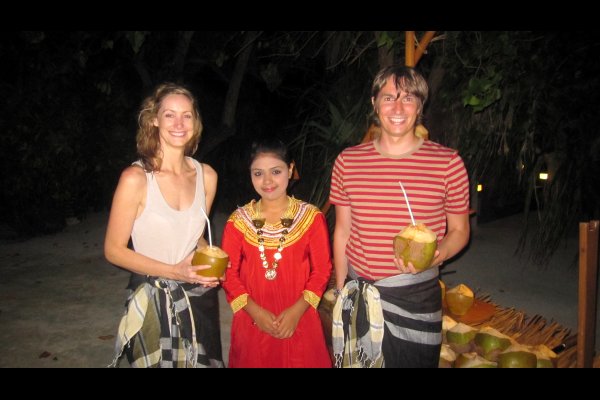 After our trip to Baros it was time to return to the airport and get another boat to Soneva Gilli, this time to stay in an overwater hut. I’ve always wanted to stay in one of these huts so it was fantastic to be able to do so on our honeymoon. The trip to Soneva Gilli is also about 20 minutes but in a different direction. We arrived at the island and got taken to our hut which was bigger than our actual home in Manly! We were also given bikes so we could get around the island easier and make trips to the restaurants, pool, shops, library and dive center.

What is amazing about the water in the Maldives which I’ve not seen anywhere else is the abundance of fish. Everywhere you look there’s tropical fish swimming about and then a sting ray and then a shark will swim past. I couldn’t enjoy the snorkeling with all of the sharks in the water, regardless of how many times the staff told me they were friendly sharks. Here’s Amy on Soneva Gilli probably pointing out a shark – 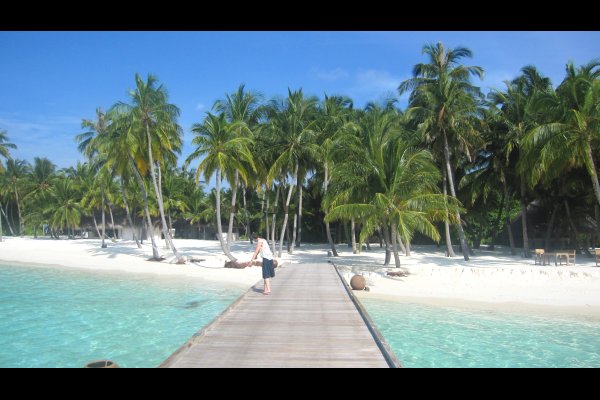 As we spent most of the time just eating and drinking, to try and keep fit I did bike tours around the island. The bikes were single gear and quite hard to ride on the sand, so it was fun doing loops of the island as fast as I could whilst also maintaining the obligatory wave to everyone as I went around. Here’s me on my bike outside our hut, the other huts can be seen in the background – 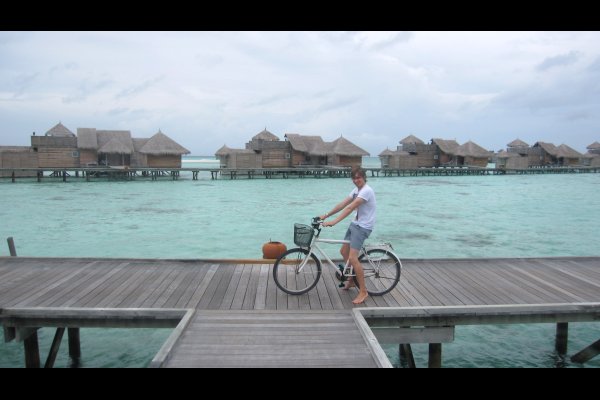 Our snorkeling adventures didn’t take us very much away from the relative safety of the hut, here’s Amy as far as she would go even through the water is probably waist deep at most up to the edge of the reef – 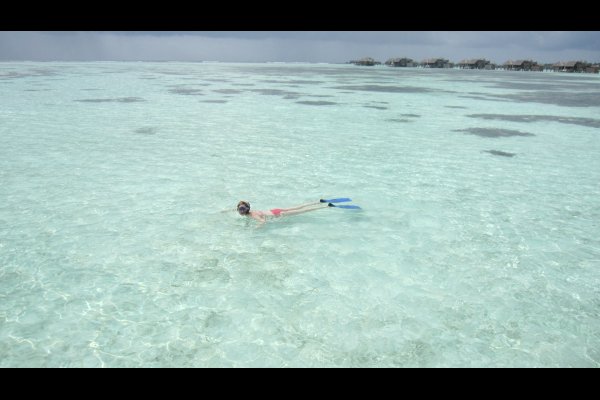 On one of the days we booked ourselves in for sushi making course at the Sushi restaurant which looked over the water. We got on our bikes and headed over to the empty restaurant to meet the nice chef who had worked all over the world to give us a personal one-to-one sushi training course. It was really good fun and we ate more than we made, I had a delicious soft shell crab maki and Amy and I both successfully made sushi rolls. After we’d finished we got some of the sushi we didn’t eat delivered back to our hut and then we biked back ourselves to have a little swim in the crystal blue waters I think that day was as close to “paradise” we could have got. Here’s Amy and I at our Sushi making course – 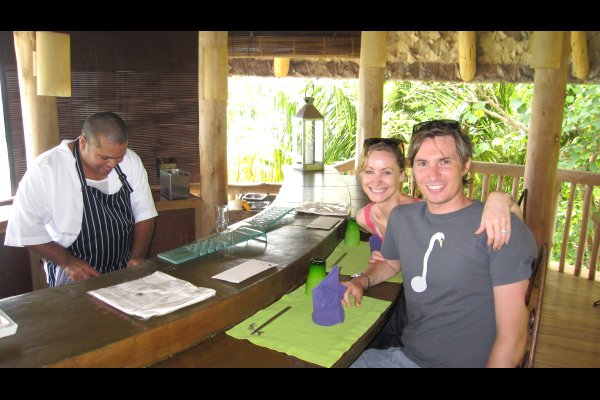 On our last night at Soneva Gilli we had a candlelit dinner on the roof of our hut, it was very romantic and sealed the end of our trip to the Maldives. It was an awesome holiday/honeymoon and one of the best I think I’ve ever been on. I took a lot more video than I did photos, so stand by and there will be a wedding, Dubai, Maldives video coming in the not too distant future!