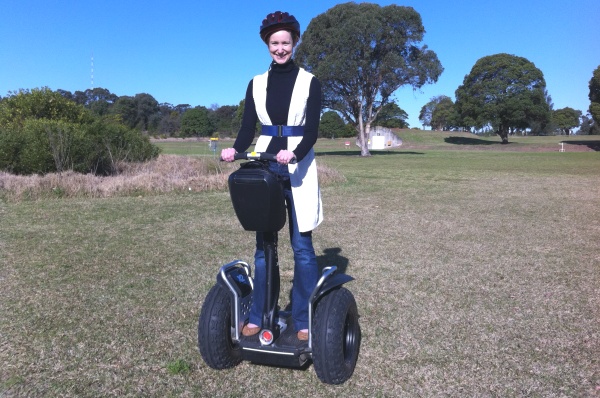 Amy on an Offroad Segway
This weekend we went to Olympic Park which is out West. It wasn’t the gun crime scene that the news portrays but a nice cafe by a river and fantastic park. Angharad, Amy, Leisa, John, Martin and myself went over there for a fun afternoon of luncheon and to learn how to ride Segways.
These devices are $10k a pop which means they cost more than our car. They are pretty awesome very hard to hurt yourself on them but you do stick out like a soar thumb. You start off in “turtle mode” which means they only go about 2km/h so there’s no chance of injury. Later, after we had got used to them the instructor unleashes them so we can get up to 20km/h. The instructor kept coming back over to me to check that he had switched off turtle mode, I obviously wasn’t pushing the envelope enough. I actually quite enjoyed crusing around at a low speed, the top speed of the Segway wasn’t exactly nail biting stuff so a lesiurely pace was all that was needed. 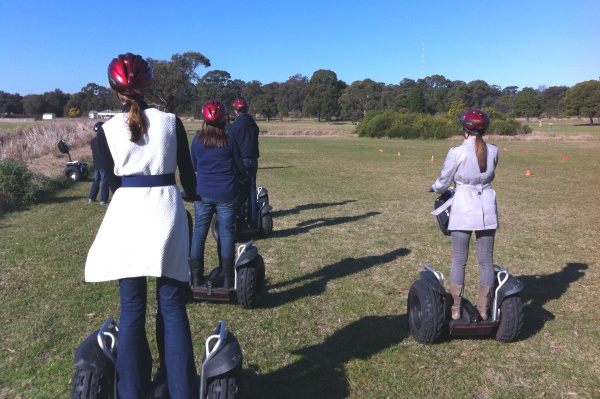 Segway-ing off into the future
It was a great time and a great new experience! Well organized Angharad.