Amy had a work trip to Hong Kong so I decided to tag along for the week. I’ve never been to Hong Kong before so it was exciting to hit a new city and see some of the sites of this once colonial outpost that has no goods tax.
Here’s a new experiment on the blog, this is a panorama that I created when I went up to The Peak which I converted into a false HDR image. You can scroll left and right to see the full image –
Scroll left to right to see full image. 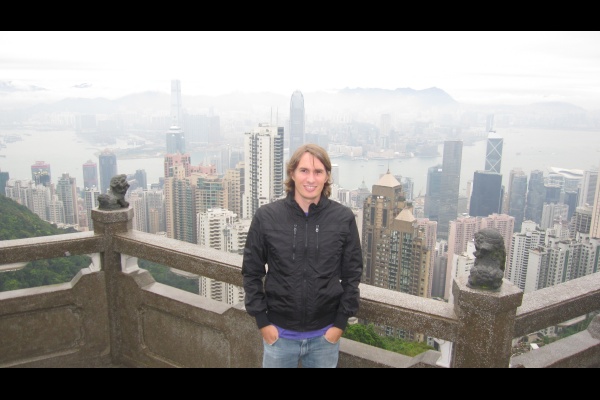 We arrived in the evening on different airlines, my plane was delayed about 5 hours which turned out to be ok because Amy landed about 10 minutes after I did so we could head into Hong Kong together. The first night we stayed at the W Hotel in Kowloon. It was amazing and one of the nicest hotels we’ve ever stayed at in a city before. The view out of the window was of the ICC building which is the third tallest building in the world by height to roof. It spent most of its time we were there in the clouds. We went for a swim at the hotel swimming pool in the morning which was on the 76th floor and was also in the clouds but still dwarfed by the ICC building. It was a bit surreal we were in a nice and warm heated swimming pool whilst we were also in the clouds on the building! 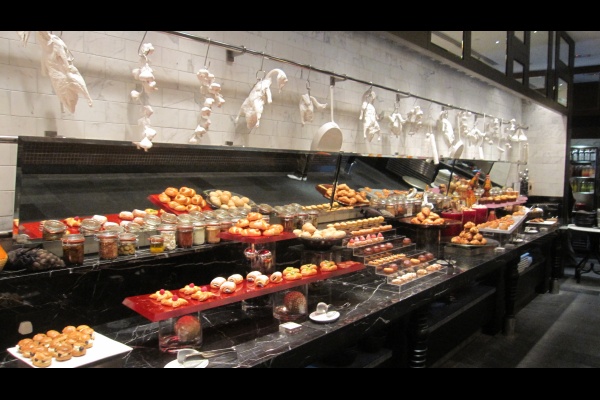 Breakfast at W Hotel was amazing!
We headed down for breakfast at the W which had an amazing choice, I especially liked the little glass bottles of tomato ketchup you could get! 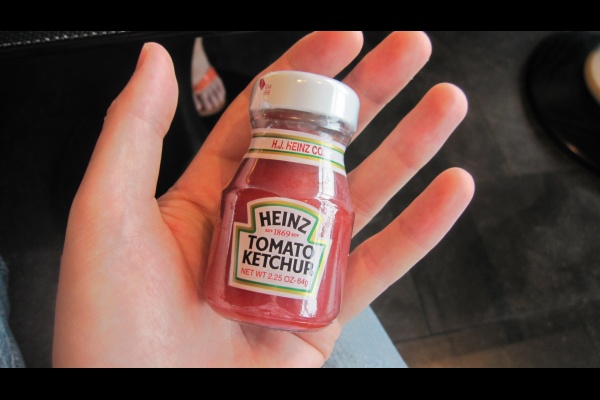 Special Tommy K Bottles!
That day we walked around the Elements mall that is in the basement of the complex that hosts the W Hotel and the ICC, it has loads of shops including Zara and H&M which was good fun to look around as they are still not in Australia. Amy and I love Zara and the word on the street is that the new Pitt Street Mall in Sydney will be getting a store which will take the fun out of going to these places a little bit! 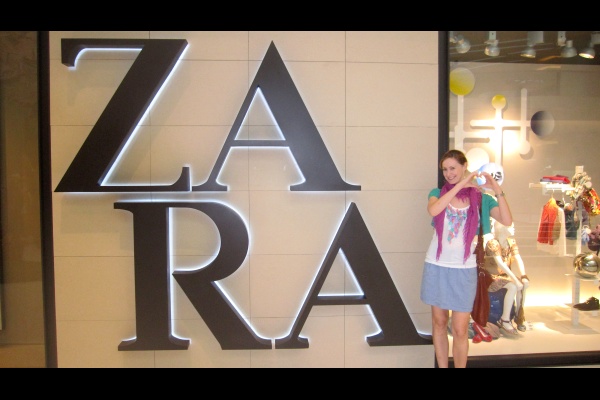 Amy outside Zara at ICC Hong Kong
That afternoon we headed out to Macau, which is another special administrative region of China. The journey takes 1 hour on a fast ferry from Hong Kong. When we got there the queues to get into Macau were massive and you could tell you were in a more Chinese part of the world over Hong Kong as it didn’t seem as organized and there seemed to be twice as much pollution. I get the impression China is building too much stuff too quickly and the environment is paying the consequences for it – 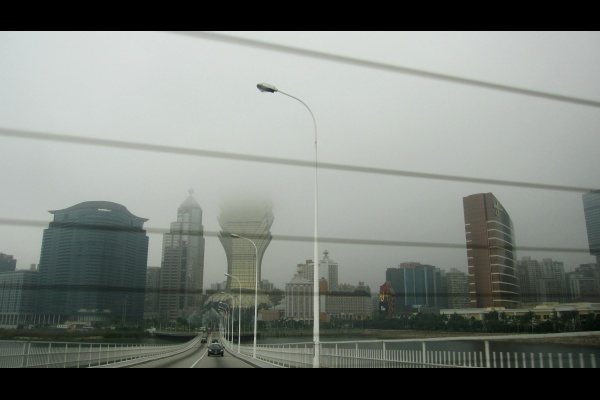 Smog in Macau from back of the Taxi
After the 1 hour of queuing for immigration we headed into a Taxi, over a bridge and to the Venetian Hotel which is the largest Casino in the world. It was a ridiculously massive building with people everywhere and queues for everything. We headed to the our hotel room after walking what felt like about 1 mile through gambling machines and tables to find our suite we had. The hotel cost $2.4bn to build and has no “rooms” they are all suites. 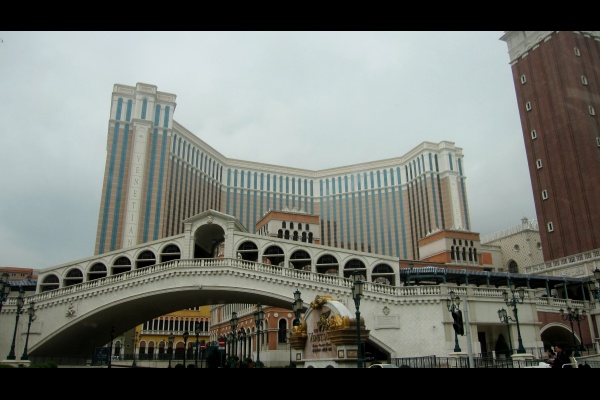 Venetian Hotel in Macau
One of the most amazing things about the building is the Venetian style streets they have and fake gondolas. Jean Baudrillard would have loved/hated the place. In one massive room the ceiling is painted to look like the sky and the buildings to look like buildings within the room. Apparently there is something similar in Vegas. This is taking “losing track of time” to the next level! It was fairly amazing to see though, even the ground looked like it was a bit wet so that you were under the impression it might have been raining earlier. 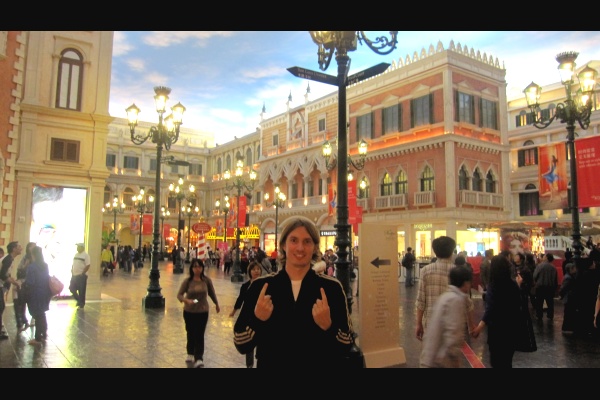 Me amazed by the indoor outdoor section of Venetian Hotel
That night we queued with about 200 other Asian people for a all you can eat Chinese buffet, we were the only Western people in the restaurant which made it even more fun. The queue for the food was crazy but we eventually got our turn. I tried to get Amy to eat a Chicken’s head but she wouldn’t let me put it on her plate.
After the madness of Macau we headed back to Hong Kong for Amy to start work. We stayed at a hotel called East in Tai Koo. It was about 5 stations down from central but was a nice room and had a great pool. The building was totally surrounded by residential buildings which could make you feel a little claustrophobic but that is the way it seems to be in Hong Kong. 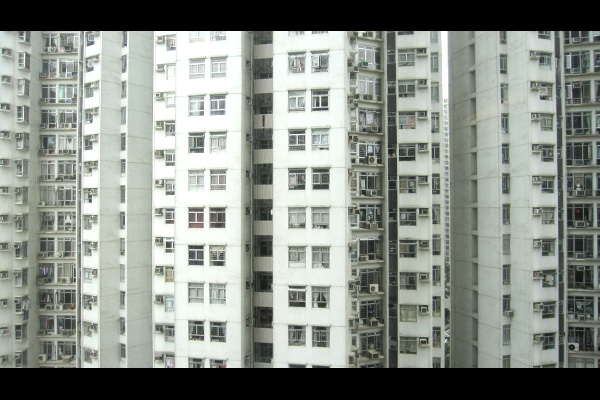 View from the Hotel Room in Tai Koo
Hong Kong is really health conscious, I am surprised coughing hasn’t been made illegal as there’s signs everywhere telling you to wear a mask if you are sick. There’s hand sanitizers everywhere you go and stickers letting you know how often things have been cleaned. 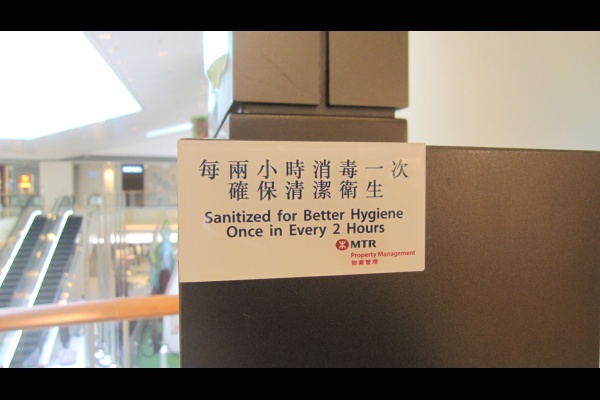 Hong Kong doesn’t want SARS again
The next day I took a trip into down town Hong Kong and basically did as much stuff as time would allow. I visited Wan Chai Electronics, headed over to the ICC again to get lunch, went to the IFC mall to go to one of the 7 Pret a Mangers there are in HK to get a sandwich and walked up the mid-levels escalator right to the top. The sad thing is there’s nothing at the top so apart from the fun ride there’s not much at the end of the ride for that one, so I just walked all the way down to the bottom again. The rest of the time I spent in the many shopping malls of HK. 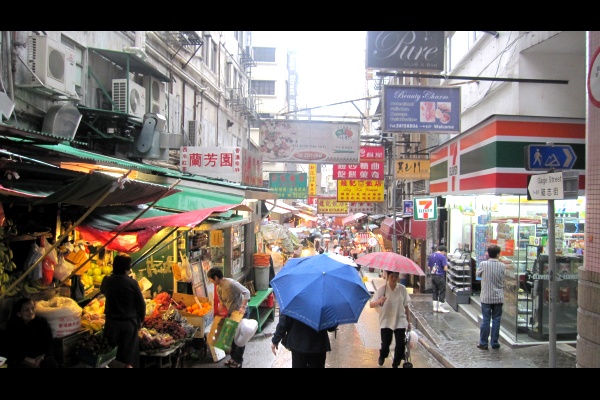 One of the many streets I walked down in Hong Kong
The annoying thing with the majority of the shops in HK malls is that they are all designer, so for every Zara there’s about 200 designer brands where everything is more expensive than it is actually worth. A good business to be in! The shopping scene here isn’t as good as other Asian cities like Tokyo, Singapore or Shanghai at least from a male perspective as there’s not as many affordable brands but if you don’t mind paying $10,000 for a hand bag then HK is the place for you! 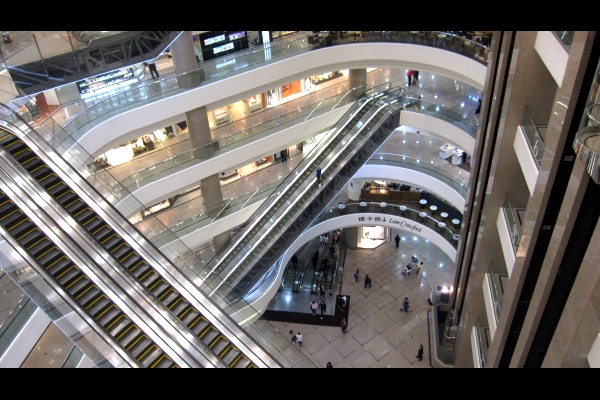 Times SquareVertical Mall at Causeway Bay
That evening Amy and I went to Sugar, the bar on the roof of the East hotel, it was a really nice bar and very quiet with great views over parts of the city we could see from the building. The cocktails here are about 25x stronger than what you get in Australia and so one is enough to get you a little bit tipsy. We also had a load of tidbits of food, far more than we can eat. There’s a lot of people in the service industry in HK so if you look at them for a second you get service right away. It got to the point where at the hotel I was trying to get to the exit before the guy who’s job it was to open the door could just as a test of their agility. 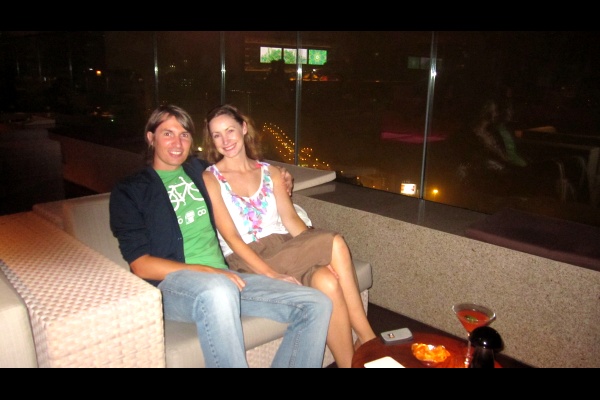 Amy and I at Sugar, Tai Koo EAST Hotel
The next day I headed up the Peak as the weather had improved slightly, the views over HK were amazing! It is an awesome city to look at from above, it is so compacted into a small amount of space it is hard to believe that you would consider building a city in the location it is in. The city is flanked by huge mountains that are a great backdrop and I think quite unique to this city.

Me at The Peak
That evening Amy and I went to Lan Kwai Fong for dinner at Indochine 1929, a restaurant Amy knew about, it was very nice and good to see all the expat people out having drinks.
The next day after seeing the inside of far too many malls I decided to do the cultural thing and head to a museum. So I went to the museum of Art in Hong Kong which had an exhibition that was nice and a lot of pottery. I liked the pottery that was over 4000 years old. That evening we went out with Amy’s work friends to the Landmark Hotel in Central and then on to an Australian cuisine restaurant where we had Chicken Shitznel and Vegetarian Burgers to really explore the Asian lifestyle!
On our last day we took the 6X bus from Central to Stanley which was about 30 minutes ride outside of downtown HK. It is amazing how fast the traffic moves around the city, you think it would be at a permanent crawl but I am under the impression not very many people own cars and the traffic system has been developed very well as cars fly through the city at about 100km/h! 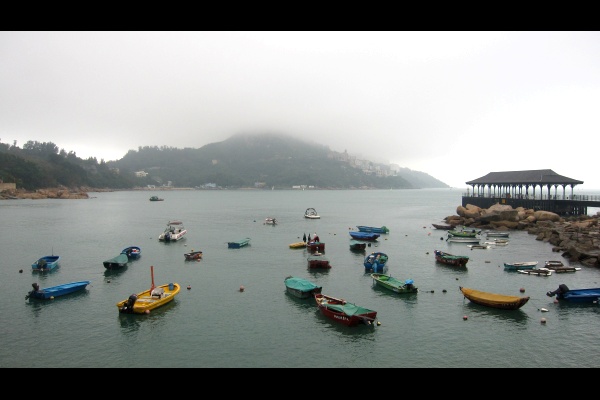 Stanley, Hong Kong
Stanley is a refreshing change from the city, it has sandy beaches and nice clean waters that are really beautiful. It also has a market where things are actually affordable, also most of the goods are fake. My favourite was a shop called American Polo Assn. which was basically a rip off of another shop with a similar name. The clothes were the same but the logos very slightly different.
That was our trip to HK it was good fun and a great new place to tick off the places I’ve been to! Till next time, watch out for the HD Video of the trip coming soon!