Last weekend Lozza, Nancy, Marcy, Amy, Chris, Marcus, Hugo and myself went up to the Blue Mountains to celebrate Christmas in July and my birthday. The place we stayed in was on the out skirts of the town of Leura. It was a nice spot with fantastic rooms.

The Group in the Blue Mountains

The food was Malaysian Chicken Curry and was very enjoyable. We stayed up for a few hours and then headed to bed and waited for Santa to arrive in the morning, which was also my birthday! My birthday arrived and we found out about all the people being killed in Norway and that Amy Winehouse was dead which was a bit depressing. The good news though it my mate who’s wedding I went to in the UK had a baby born on my birthday!

Amy, Marcy, Chris and myself headed into Leura to get some coffees, we went to a nice shop that sold various sorts of papers and I had a bet with Chris that the music store would be closed down but it was still open! We then went to Wentworth Falls in the hopes it would be raging thanks to all of the recent rain, unfortunately it was not the case.

We then headed back and had some nice snacks and sat around the fire. Out of nowhere Santa Claus appeared! He had bought us all gifts. Everyone sat on Santa’s knee and was given a surprise gift (that we had all bought each other). Here’s all of us with Santa with the tree in the background – 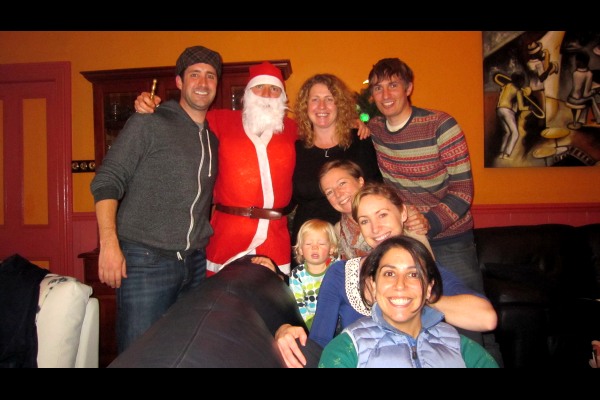 All of us with Santa and Hugo with his eyes closed

That night we had Roast Rib of Beef and all the trimmings thanks to Lozza, some delicious cup cakes made by Chris and Marcy and Chocolate fondant supplied by Nancy and Marcus which totally put us into a Christmas food coma. We then played a game of singing songs in the style of the song but from words in a magazine which was fun and then a game of charades. 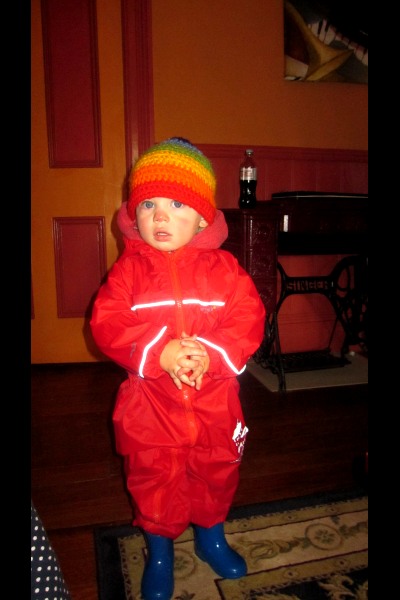 It was a fantastic Christmas weekend away and a great way to celebrate my birthday!