I set off this morning at an early 07h30 hours for the 300km drive to Canberra. Canberra is Australia’s capital, a ‘new city’ that had to be built as part of Queen Victoria signing the Constitution Act that created the Australian Commonwealth. The town was designed by a resident of Chicago, Illinois – so it feels very American. It reminded me of Geneva, Switzerland as it has the lake with government type building surrounding it, the hills and a very similar water jet in the lake.

The drive there is one long lonely road, most of the scenery looks like this, which is nice at first, but it doesn’t feel like you aren’t getting anywhere after about 2 hours of driving – 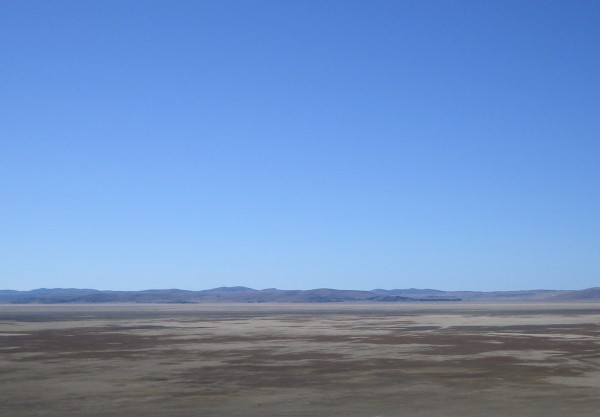 First stop, after the tourist information centre, was the National Museum of Australia – it was very interesting, had lots about the wildlife in Australia and how most of it was dead now thanks to us Europeans bring in ‘useful’ animals like cows and sheep. I found there a lot of references to aboriginals and alcohol, I came out thinking they were trying to give the impression they are all drunks! This was the path from the carpark, a clever design but a little bit confusing – 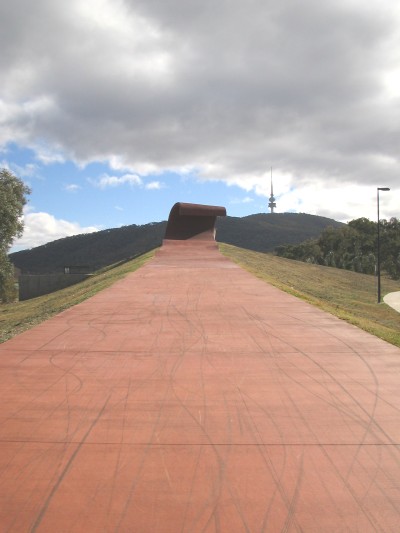 In the distance you can see the Telstra Tower which deceptively looks like it is behind the hill, when actually it is on top of it (more on this later).

I then went into the ‘City Centre’ which is tiny, although it does have a good record shop where I bought Mogwai – Mogwai Young Team for $20 (to kill some time in that car journey back). Whilst in the town I decided to pick up a map of Canberra and find out more about NASA’s Canberra Deep Space Communication Complex. I asked the tourist information lady for the map as well as what the opening times were for the CDSCC – to which she replied “It got burnt down in the fires” – I looked at her with a “oh? what fires?” expression to which she replied “the fires… last year?” – still using facial expressions I replied with a “no never heard of them” she replied “THE FIRES THAT NEARLY KILLED US ALL IN JANUARY LAST YEAR, DON’T YOU KNOW THEM?” – so I just said “no..sorry, thanks for the map” and ran away. Thanks to google I now know what she means – you can too.

I picked up a leaflet on Parliament House and decide that is the next place I shall visit on my list. Parliament House sits on top of a hill in the middle of the town, it has a road that leads almost up to the door. At first I was apprehensive if I should just drive my stupid car up to the door of the nations capitol. I could just imagine seeing the security guards looking at me with apprehension in their faces and then take the car and me out in a blaze of machine gun fire. However, after driving around Parliament House twice I decided it was the only way in. To my amazement, there was hardly any security and tourist parking was underneath the building!! This is me outside Parliament House – 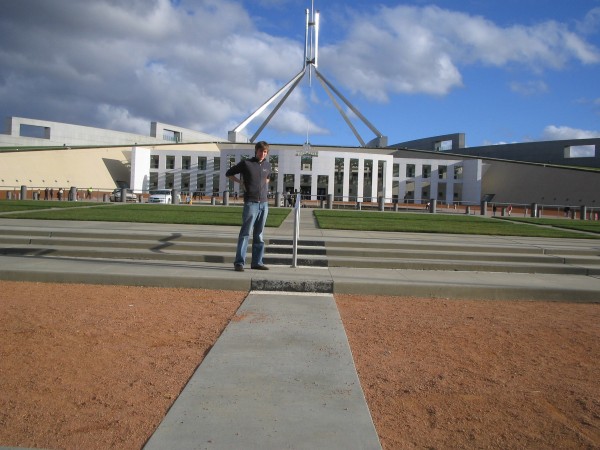 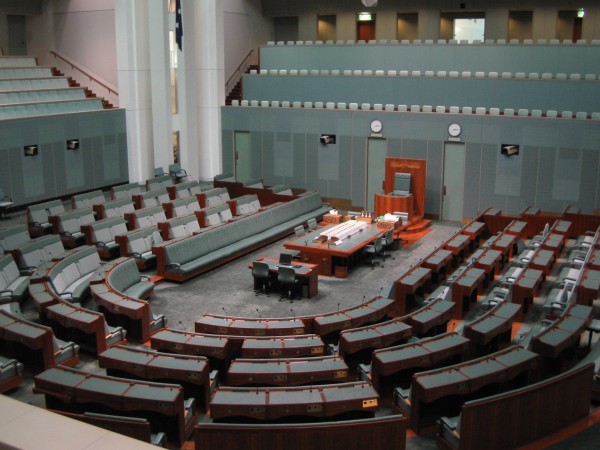 After being amazed by the lack of security at this place, I went to the Telstra Tower to take a look at the whole of Canberra (which is a very little place). It cost $3.30 to get in and was the only entry fee I had to pay all day. Here is a view of Canberra from the top of the tower –

I had to take a picture of the stupid car as the masts on the tower were interfereing with the radio controlled locking system. I was concered he might have driven away by himself and off the mountain. 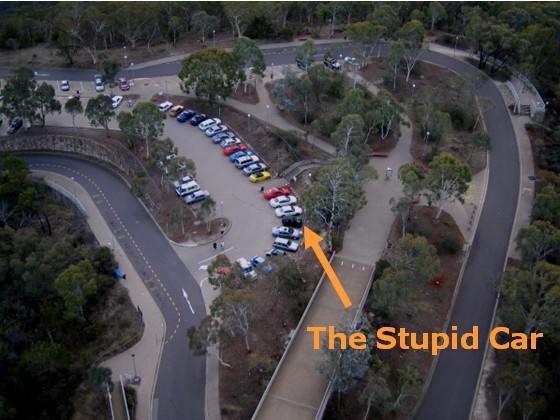 Afterwards I drove to the Canberra War Memorial, it was 16h55 and everything closes at 17h00, all I really wanted to see was the Iraq section so I rushed through the building only to be told the section was closed. However, all hope was not lost, on the way back to the stupid car I spotted this little guy, the first wild ‘roo’ I’ve seen – 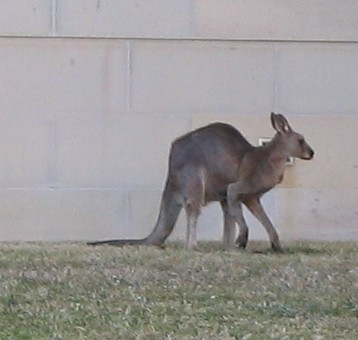 After this I drove back the 300km to Sydney but in the dark and with my new CD. The journey back felt much quicker, probably because I couldn’t see those mountains!!